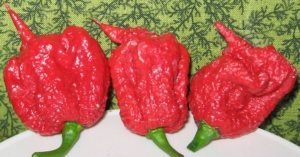 This is the Butch T Trinidad Scorpion Strain. The Moruga Scorpion (Capsicum chinense) is from the Islands of Trinidad and Tobago. It was formally announced on February 6, 2012 at the Chile Pepper Institute Leadership dinner to have tested at a high of 2,009,231 Scoville Units. A new world record!    It has a slight Scotch Bonnet shape but does not usually grow a small slender tail like the Trinidad Scorpion. Pepper pods are much larger than the Trinidad Scorpion and are more consistent in shape and size than most Trinidad super-hot varieties. The surface of it’s outer skin is rough and pebbly like the Trinidad 7 Pot chile varieties and one would say it looks like the texture of the human brain. Average size of the pods is slightly bigger than a golf ball. These peppers are loaded with Capsaicin and you can actually see droplets form on it’s extra thick placental tissue after cutting the pepper open. The flavor is described as fruity and floral and heat builds long after eating. Plants average over a meter in height and are very productive.

Be the first to review “Carolina Reaper”