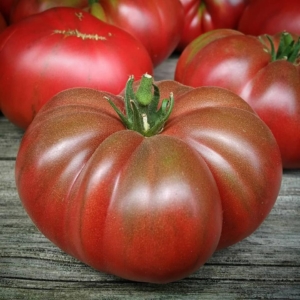 BKX – 10 Organic seeds
Also known as Black Krim Potato Leaf. We received this tomato from a garden buddy in Texas, discovered in his patch of regular leaf Black Krim tomatoes. This version is an improvement we believe. Much more crack resistant and bigger producer than the regular leaf version. Big dark purple tomatoes that did remarkably through a drought. It has the smokey sweet flavor associated with black tomatoes with a perfect beautiful appearance. Probably one of the best producing black tomatoes we’ve grown.  We gave the name BKX (similar to KBX, a potato leaf mystery) A must try if you love the black tomatoes.

Be the first to review “BKX”