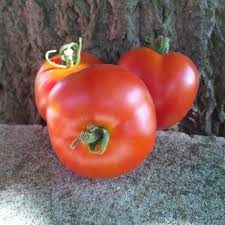 This red tomato was grown in the village of Blaby in Leicestershire England just until the end of WWII. It was the main tomato crop supplied during the war, grown by Shoult’s Tomato Farm.  The farm ceased operations just after the war and the seed was believed to be extinct for almost 60 years. That is until Dr. Russell Sharp from the University of Lancaster stumbled upon less than 20 seeds in a seed bank in the Netherlands. It was grown out at the University and the seed was distributed to the residents of Blaby ONLY.

This is where  I went on a mission. After much googling, I found the name of one of the residents that grew it out,  got the phone number, and called a random stranger in the village of Blaby and begged for seed. He sent it. I was the first person in the United States to grow the new seed of Blaby Special and Dan McMurray was the first Canadian to grow it.

It is a small, red tomato that grows in trusses. Excellent canning tomato and for tomato collectors a must. So much history in the DNA. Old fashioned tomato taste. A tomato aficionado’s dream. EXTREMELY RARE AND ENDANGERED. Also see Manx Marvel, another heirloom saved by Dr.Sharp Manx Marvel

Be the first to review “Blaby Special”