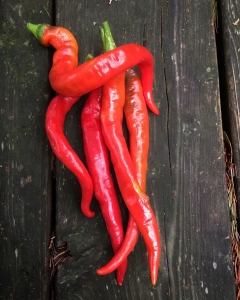 This chili pepper was created by a Japanese seed company Tokita. They were released for market sometime after 2010. Originally named Witch’s Wand, they range from straight, to curved to corkscrew shape most reaching 20 centimeters or 7 inches. The can be eaten at any stage from green to red (mature). Thin walled, they have a earthy sweet taste. When used green there is almost no heat, if you let them mature to red, they have about the same heat as a Cayenne or Piment d’Espelette, so mild heat.  It can be roasted, grilled, used for salsa or topping a pizza. We made pepper jelly with them. Who doesn’t want to grow a pepper called Witch Sticks?