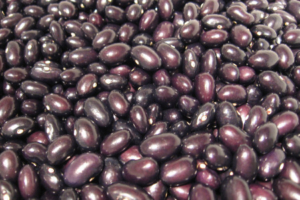 This is probably the most famous bean in the world. Alubia de Tolosa’, which translates from Spanish to “Beans of Tolosa,” originates from the ancient town of Tolosa in the Basque province of Gipuzkoa, Spain.  The beans are such an integral part of Basque culture that they even have their own feast in mid-November called “Babarrunaren Astea” or “Week of the Bean.” The bean was recently awarded a denominación de origin and was added to Slow Food’s Ark of Taste
The plants grow to eight feet or more and produce abundant amounts of five to six inch pods that typically hold seven plump, dark black, quite beautiful, egg-shaped beans. Black and shiny, fading to purple when cooked, buttery and fine-skinned, with a taste very much its own.

Be the first to review “Alubias de Tolosa”