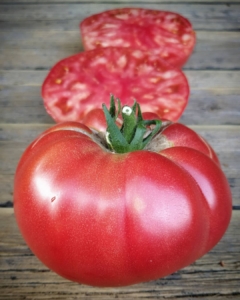 I received these seeds from Robert Lash of Pennsylvania. The history he gave me is that there was an old Italian man that lived on his street that grew these giant tomatoes. Biggest Robert had ever seen. One day Robert had driven down the road and all the tomatoes were gone. Neighbors told him the old man had passed away but had some seeds for the tomato and they shared.  The old man’s name was Mr. Tundrich and it was said that he (or his family more than likely) brought the seeds over from Italy when he was a child. This is one of those heirlooms we like to save. Not many of them have a future if not for some generous people sharing seeds and stories with us.