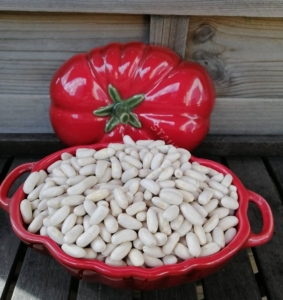 These are specialty white kidney-shaped beans from the French Vendée region. The area is named after the Vendée River that runs through it.   These beans have a history of being grown since the 16th century.  Actually, Mogettes are a variety of white bean known as haricots lingots. There are several types of Lingot beans and usually the name of the area they grow in are attached to the name.

Awarded France’s coveted “Label Rouge” in 2010. This small  white kidney-shaped bean is tender  with a delicate skin, which melts in the mouth once cooked. The flesh is soft and buttery and has a slight salty and sweet taste. Some say it hints of Chestnut and Leeks (yes, they do smell a bit like Leeks)  It is used predominately in dishes of the Vendée region, such as jambon-mogettes (ham and white beans). Also one of the white beans (along with the Tarbais) used to make the famous French Cassoulet. Rub a slice of bread with garlic, butter it, spread the beans on top, and you have  the Vendéen favorite, the gralée de mogette.

We sourced our organic beans from a grower in Vendée so that we would be able to offer the bean grown in it’s geographical home with it’s official name.