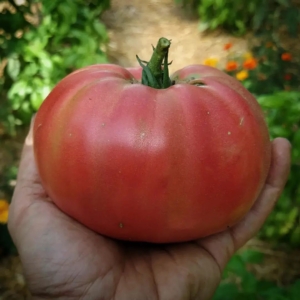 Konare– 10+ Organically grown seeds
AKA Kurtovo Konare
Konare is widely known as a Bulgarian tomato. According to SlowFood International, it may have had it’s origin in Istanbul.
It was added to the Ark of Taste of the Slow Food Foundation for Biodiversity in 2016.
*’According to the legend and slow food, the seeds of this tomato reached Bulgaria’s Pazardzhik plain directly from Tzarigrad Istanbul at the end of the 19th century, hidden in a walking stick by Alexander Dimitrov, a local celebrity who introduced various New World crops to the region. At first, they were grown only at home gardens, but later came to be sold commercially. The seeds are passed on from generation to generation throughout the decades.’~~slowfood_international

Since 2009, every September,  there is a festival centered around this tomato in Bulgaria called Kurtovo Konare Fest

This was probably our favorite of 2022. Amazingly beautiful tomato that reached that coveted sandwhich size. One slice covers your bread easily.  Large and loud taste. Very sweet. The interior is a deep dark pink that really doesn’t need any salt. The texture is solid without being hard so it holds up well on bread or tomato salad.  It did very well with production in spite of our 3 month long heatwave.  Don’t miss this one. Once sold out, it won’t be back in rotation until 2024.
Indeterminate